We had covered few parts of Karnataka. Have heard Kerala state has good trekking places. I started searching for the good places in Kerala. Wayanad district is the border district between Karnataka and Kerala, we thought why should not we venture into Wayanad. Three people Guru Prasanna (Guru), Shashidhara (Shashi) and Hari Prasad (Hari (Myself)) were ready to step in to Kerala. After digging down we planned the following.
Plan:
Information:

To start with, I really appreciate Guru and Shashi for completing the trekking even though they were not well.
Kerala is unknown place for us, don’t know the language, Don’t know any friend(s)/people in Wayanad district.  Till the last day Guru had not booked tickets to Kalpetta city. Kalpetta is the District head-quarters of Wayanad district. On 12-Dec-2008 we were suppose to travel to Kalpettta.Guru reached majestic to book tickets on the same day of our trekking at around 8:30PM.

Unluckily guru was not well. His front gate had opened (Vomiting). By the time I came to know his illness, he had already blocked 2 toilets in majestic. Latter rare gate also opened (Dysentery). We thought it may a red signal for our trekking. Guru was not willing to stop trekking because of him.We got in to a KSRTC (Kerala Transport) AC Bus. Since it was AC bus we thought it may be problem for Guru. Bus started and Guru didn’t feel vomiting. He could not accomodate even water in his stomach.

We reached Kalpetta city at around 4:00 AM. It was very calm morning. Guru did not have anything in the night. Due to acidity Guru had hiccups. In the calm morning hiccups could be heard for 200 meters. We searched for lodges all were full. Finally we got a room in a lodge. Till 10 am we were unsure of trekking. Shashi also had got light fever.At 10 am we went to an Udupi hotel. Had idli(s). Guru vomited that also. Shashi brought Dashamoola (Ayurvedic medicine), all of us had and then we thought of going to trip by a jeep.

Asked a police about where to get a cab for our trip. He himself arranged a Jeep for us. Our Driver name is Ashraf. We knew Kannada, English, Tulu and broken Hindi. Our driver knew only Malayalam. It was difficult for us to convey the message. Kept our luggage in lodge and started to . Yedakal caves was full of visitors. It was . We took approximately 1.5 hrs to reach peak. It was slippery track. 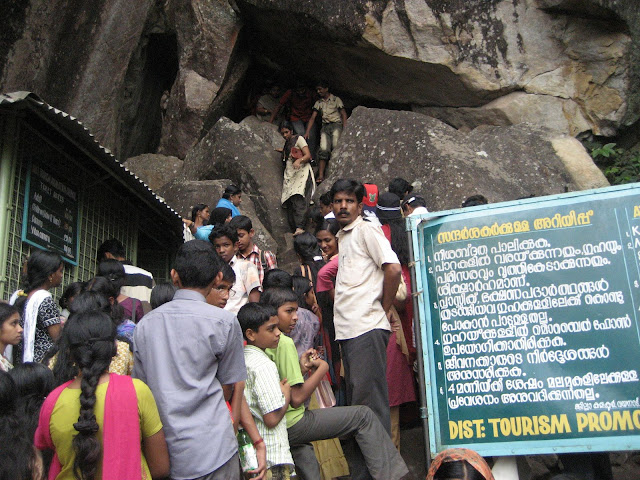 ﻿﻿We got down and started to Suchipara falls. We reached Suchipara falls by 5:00 pm. Had bath in the falls. It was a safe and nice falls.﻿﻿﻿
﻿Guru created a scene in this falls. He did not take bath due to his illness. After sometime while wandering in the falls he slipped and fell flat on a rock. He was hurt on his back. After some time he became normal. Some girls from college came to Suchipara falls. Guru was talking to all girls in Malayalam. Girls were talking in malayalam, I have translated what they have said to english.
Girl: Don’t you know Malayalam.
Guru: Yenaku Malayalam ariyadu.
Girl: You are talking in Malayalam and saying you do not know Malayalam.

Now our guru became translator between us and our driver. On the way to Suchipara falls few shops had gooseberry which were soaked in salt water. It was very nice, do not miss it if you ever go there. We reached Kalpetta by 7:30 pm. Had our lunch in Aafaz hotel. Only Aafaz and Udupi hotels were the vegetarian hotels available in Kalpetta. Our Shashi’s Dashaamoola worked really great. Guru was almost normal. Shashi also felt well from his fever. We slept for the day.

We got up at 5:00 am and got ready by 5:30 am. Our driver Ashraf came to our lodge in the early morning. We started to Maatanga wild life sanctuary. From Karnataka Bandipura forest, from Kerala Maatanga wild life sanctuary and from Tamil Naadu Madhumalai forest joins here. We were the very first to enter Maatanga wild life sanctuary for that day. Ashraf told we can see many animals because we are the first to enter. But we saw few cars moving earlier to us. Very start of the forest, forest officer shown 2 tusks. They were actually tied to a tree. We spotted jackals. Guru immediately responded saying “ಕುದುಕ್ಕ  (Jackal in Tulu) ನೋಡಿದ್ರೆ ಬಹಳ ಒಳ್ಳೇದು. ಅದು ಒಳ್ಳೆ ಶಕುನ”. We could able to spot 1 wild elephant and deer. We returned to Kalpetta by 8:30 am. Kudukka did not bring any luck till now.

Had our breakfast and started to Chembara trekking starting point by jeep. Our driver told this trekking is 1.5 km trekking. Also told us there is high chance of getting lost.

We started our trekking and the path to Chembara was very clear. There was no chance of getting lost. Trekking was very steep terrain.

We saw the beautiful lake during our journey to peak. There were steps of animals, which had come to drink water. We enjoyed a lot in the lake. Reached the peak at 2:00 pm and started back. We took 3-4 hrs to reach peak.﻿ ﻿
﻿﻿﻿﻿We enjooyed a lot in this lake. It was looking like only source of water for surrounging forest animals. Fishes residing in the lake were cleaning our legs. Gave chakkota fruit to fishes also. 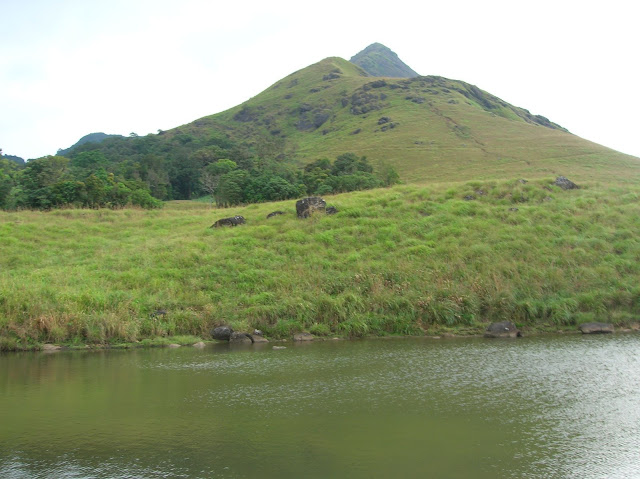 ﻿﻿Started back to Kalpetta. Ashraf asked more money today. It was unacceptable to us. Still we could not bargain because our Guru had forgotten the yesterday learnt Malayalam.

We were waiting in a bus stand. A bad news was waiting for me, I got a call saying one of my close relative has expired. Guru and Shashi started to . I started to my relative house .
Posted by ಪ್ರಕೃತಿ at 4:30 PM